|c++ tutorial for beginners|Many new programming languages appeared during The 1960s. the computer at that time was still in an early stage of development. The language ALGOL 60 was developed as an alternative to FORTRAN. The language CPL developed in 1963.it was more specific for concrete programming tasks of that time ALGOL and FORTRAN.
But it was very difficult to learn. Martin or Richards developed BCPL in 1967 that was a simplification of CPL.
Ken Thompson created the B language in the 1970.C language is derived from the B language.
The B language provided the basis for the development of C.C language  was originally designed to write a system program under Unix operating system .the power and the flexibility of C language made it popular the industry for a wide range of application,
The earlier version of C was known as asK&R (C). The ANSI developed a standard version of the language.
The standard version is known as ANSI  C. this new feature provided many features that were not available in the older version.
Bjarne Stroustrup from the bell lab started the development of c++ language in 1980. the first commercial release of the language appeared in October 1985.it was originally named was c with classes.it was an enhancement to C language .it allows the use of programming a technique is known as object-oriented programming.
C++ language was refined during the1980s and it becomes a unique language .it was very much compatible.
With the code of C and provided the most important characteristics of C.
In mid-1998 ANSI/ISO  C++ language standards were approved .this standard is used by most of the compilers used today to compile the program. The language becomes very popular and now itis the preferred language to develop professional applications on all platforms. 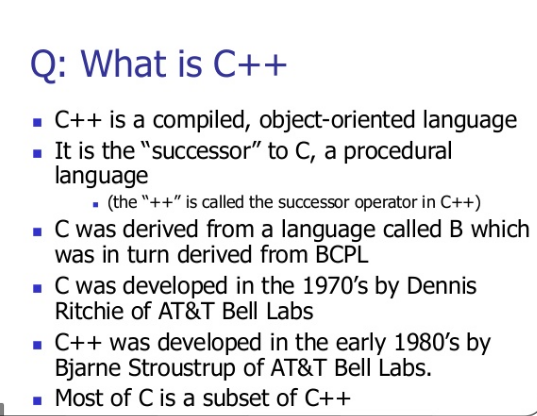 C++is a well-structured language .its syntax is very easy to understand? the program is written in the C++ language and is easy to maintain and modify.

C++is case-sensitivity language, it means that it can differentiate uppercase and lowercase words all keywords are written in lowercase .this features make it easier to maintain the source code.

C++  language provides machine independence .it means that the programs written inc++ language can be executed on different types of computers . for example, programs are written in c++ can be executed on Intel processors with a little modification .it is preferable to write a program in c++ rather than machine language

C++is an object-oriented programing language .in object-oriented the technique, the program is written on the basis of the objects. an object is a collection of data and fu8nctions.object may represent a person thing a place in the real-world..in oop, data and all possible functions on data are grouped together .object oriented programs are easier to learn and modify.

C++ provides the facilities of the modular programming.
It means that a program can be divided into small modules. these modules can be developed and compiled independently and then linked together.

The standard c++ library is an asset of function constraints classes and objects to extend the c++ language.
It provides the basic functionality to interact with the operating system. This library can be reused by any programmer for writing programs more easily in less time. 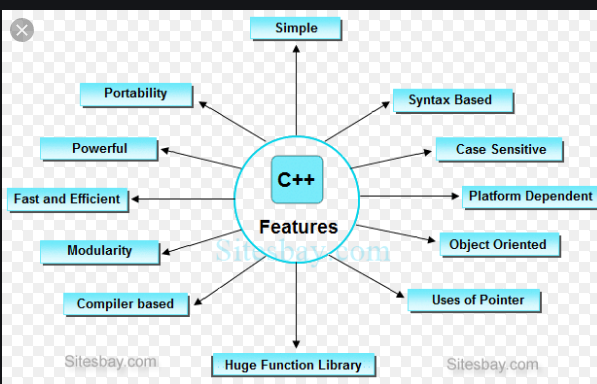